Ogun State Governor, Prince Dapo Abiodun has assured that his administration would uphold the rule of law and cooperate with other arms of government in moving the state forward. 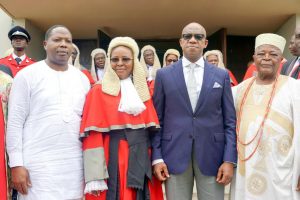 The governor also assured the state judiciary that its new Complex located along Kobape Road, Abeokuta, would soon be completed.

Governor Abiodun, who gave the assurance at a special church service to mark the 2019 Legal Year held at the Cathedral of St Peter, Ake, Abeokuta, noted that the judiciary has been a pillar for the survival of democratic principles and preservation of the people’s right, which is the essence of government.

He said his government would protect the rights of the people of the state as well as upholds the principles of the rule of law, provide a just, free and egalitarian society which guarantees continued development and abundant life for the people, irrespective of their gender, geographical location, economic, political or religious affiliations

According to him, the new legal year was another opportunity to reaffirm individual and collective commitment to the course of justice and improvement on the administration of justice in the state.

Calling on the people to join hands with him to build the state for the benefit of all, Governor Abiodun also assured that the judiciary will benefit from his administration’s digitalisation process to enable judges use Information Technology to ease their cumbersome tasks thereby significantly improving administration of justice.

“I assure all members of the Bar and Bench that we will be according the completion of the Judiciary Complex and its furnishing the necessary attention within available means so that we move the judiciary to its permanent location soonest.

The governor noted that the state was blessed with array of some of the best professionals that have rendered services to humanity around the world.

In his sermon, the Bishop of Egba West, Anglican Communion, the Rt. Rev. Samuel Ogundeji, urged judges to be impartial and unbiased in the discharge of their duties, but examine all facts before them in order to deliver sound judgment.

While admonishing  them to judge with the fear of God, Rev. Ogundeji described excellent judge as one who accept his mistakes and work towards correcting them, adding that all, irrespective of status would be judged according to the their works base on God’s standard.