Ogun State governor, Dapo Abiodun, has raised the alarm over the presence of fake governor’s complimentary cards in circulation. 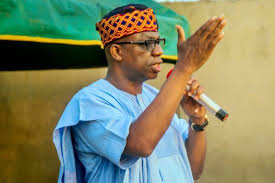 Abiodun, therefore, warned members of the public to be wary of such fake official complimentary cards being brandished around by some unscrupulous elements.

The governor, who rang the alarm bell in a statement by his Chief Press Secretary, Kunle Somorin, on Monday, said the cards were forged to insinuate that the seat of government had relocated to Abiodun’s country home at Iperu-Remo.

He declared that he had no hand in the fake complimentary card bearing Iperu-Remo as his official office, stressing that he would not reduce the office of the governor to a “family estate.”

“Every right-thinking person knows that Oke Mosan, Abeokuta, is the official seat of the Governor of Ogun State. We have promised to uphold the Rule of Law and provide good governance. We have scrupulously stayed on that course.

“Therefore, we have no doubt that the printing and circulation of those fake complimentary cards must be the handiwork of mischief makers who have sinisterly ulterior motives,” Abiodun was quoted as saying in the statement.

The governor further explained that Emmanuel Villa in Iperu-Remo is his private residence, saying “nobody can transfer the instrument of office to a country home. It must be part of the campaign of calumny to disparage and lower the esteem of the governor before the right-thinking members of the public and the good people of Ogun State who gave me their mandate to govern them.”

Abiodun, however, urged members of the public to disregard any complimentary card that bears the address of his private residence.

PLATFORM TIMES and its journalism emptiness, a medium that belongs to the trash