The founder of Baba Sabiko Theatre and Comedy Group Int’l, died in Ibadan, Oyo State, over the weekend.
Related Articles

“I couldn’t believe it until I was at the hospital where he passed away and saw his corpse. I saw him and his wife last Friday and as usual cracked some jokes together.

“Abiodun Aremu, Baba Sabiko, my Surname sake; one of the best comedians in the entertainment industry. He normally called me Uncle Demoo (though far far older than me), and I would reply Ba Sab. Painful but it is well.

Baba Sabiko was a comedian, theatre artiste, Master of Ceremonies; script-writer, film producer; singer and promoter before his death.

He featured in over 40 top Yoruba films. They include Ija Ominira, Ija Orogun, both by the late Ade Love. Others are Bukola Omo Daddy by Peju Ogunmola, now Omobolanle, Ija Agba Meji, Igbanladogi and many others.

He established his own outfit, Abiodun Aremu (Baba Sabiko) Performing Company, in 1978. 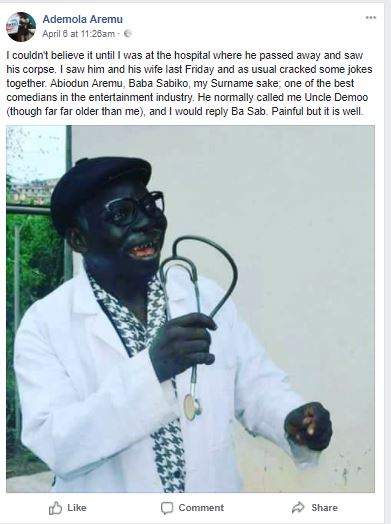 How N671m APC funds were moved into private accounts

Buhari announces intention to run in 2019