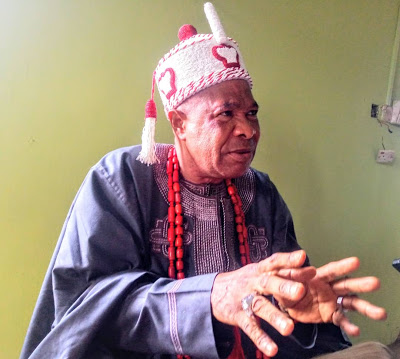 Oba Sowemimo gave this advice following a statement credited to Olu of Itori, Oba Akamo condemning past administration in the state under Senator Ibikunle for denying developmental strides in the state, especially Dangote factory expansion.

He noted that, the rift between Senator Amosun and foremost business mogul, Alhaji Aliko Dangote was as a result of pranks and hanky-panky played by Olu-Itori in the estrangement of the proposed Dangote cement factory expansion in Oluke under Ewekoro local government area of the state.

He added that, it was Olu Itori who lied to Aliko Dangote that, he had gotten approval from the state government for the expansion of the cement factory, a development the businessman considered to be genuine before embarking on the expansion.

The light-skinned monarch stressed further that, Dangote’s action infuriated Senator Amosun, and ordered for the demolition of the construction on the site.

“I’m surprised that, Oba Akamo can be saying all sorts of bad things about Senator Ibikunle Amosun because he was one of major beneficiary of the former governor.

“I just want to warn the incumbent governor, Prince Dapo Abiodun to beware of Oba Fatai Akamo’s antics. He is a player. He is fond of switching allegiance to any new government, but immediately new government come in place, he will condemn the outgone government.

“He started this with Otunba Gbenga Daniel, but when Amosun got to power, he mocked Daniel’s administration as a failed one. When Amosun was in power, he romance him and even established Ogun Central Progressive Obas Forum to support Amosun. Even, on the eve of Amosun’s administration, he got a jeep as take away gift from the former governor, but now he is singing different song because he want to benefit from Dapo Abiodun’s government.

“It is wrong for royal fathers to be partisan in politics, because we should be fathers to anyone who becomes governor. Though, I regret my action during Amosun’s administration, but playing politics is over. We should be playing in an advisory role now, not to be siding any politician. Akamo is a player, Governor Abiodun should avoid such character.”