In what transpired to be settlement and ensuring peaceful agreement in National Union of Road Transport Workers (NURTW) at the national level, the National President of the Union, Alhaji Tajudeen Baruwa has agreed to swear in Alhaji Akeem Bodunrin popularly known as Iyeru as Chairman of Ogun State NURTW. 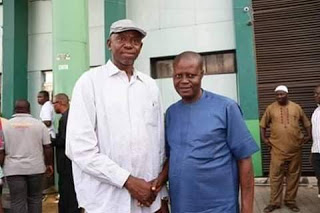 It had been rumoured that Baruwa planned to impose his loyalist as Chairman against Akeem Bodunrin.
Both Baruwa and Bodunrin are from Ogun State, but they were not in good term.

According to a source who revealed to our reporter said Ogun State Government under the leadership of Governor Dapo Abiodun intervened and had parley with the National body of the union. It was gathered that amicable resolution was agreed on that Bodunrin should be the State Chairman so that the government could lift ban on the union activities.

The source also said that 28th of October, 2019 had been picked for the swearing ceremony when Bodunrin would be installed as Chairman. Bodunrin was choosen as the choice of members of NURTW in the state.