No fewer than eight cows were killed by lightning at a mountain in Oyinmo Quarters, Ikare Akoko the headquarters of Akoko North East Local Government Area of Ondo State late on Tuesday evening. 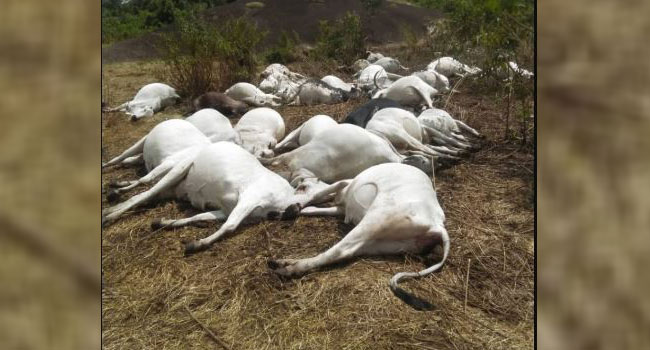 The incident happened barely a month after 36 cows were killed by lightning in Ijare town in Ifedore Local Government Area of the state.

It was gathered that the eight cows, owned by some Fulani herdsmen, were struck dead while grazing on top of the mountain. The two Fulani herders who accompanied the cows were said to have fled the scene after the incident.

However, a source disclosed that five men have been arrested by the men of the state police command for buying the dead cows from the Fulani herders.

The source said, “Immediately after the cows were struck dead, the two Fulani boys that followed the cows, rushed to the butchers in town and sold the cows to them at cheaper prices. But the police got to know of it and arrested all of them.”

Confirming the incident, the state Police Public Relations Officer, Mr. Femi Joseph said the investigation had commenced into the matter.

“It was the environment officers that discovered that the Fulani boys were selling the contaminated cows to the butchers and reported to us. So about four butchers have been arrested and one herder on the matter. We will charge them to court after the completion of our investigation.”

The state chairman of the Maiyetti Allah Cattle Breeders Association, Alhaji Garuba Bello, when contacted, said he had not been briefed about the development.

“I have been calling their (MACBAN) chairman in Ikare Akoko, to know what happened, but his line was not going through”

The environmental health officers in the four local governments announced the suspension to avoid circulation of contaminated meat to unsuspecting members of public.

The Director of the Environmental Health Officers for the Akoko North-East Local Government, Mrs Yemisi Adeniyi, who spoke on behalf of the other health officers in the area, said the government took the decision when information filtered that herdsmen that owned the dead cows had invited butchers and sold the cows to them who in turn would sell them to members of public.